By casamanfredi / 22nd novembre, 2016 / Religion and spirituality / No Comments

San Giovanni Rotondo is the name of a city and comune in the province of Foggia and region of Apulia, in southern Italy.

San Giovanni Rotondo was the home of Saint Pio of Pietrelcina from 28 July 1916 until his death on 23 September 1968. The Padre Pio Pilgrimage Church was built in devotion to the saint and dedicated on 1 July 2004. The city is renowned for its hospital and medical-research centre Casa Sollievo della Sofferenza (Home for the Relief of the Suffering) founded by Saint Pio of Pietrelcina.

The nearby Sanctuary of Saint Michael the Archangel is also the site of Catholic pilgrimages and was visited by Pope John Paul II in 1987. 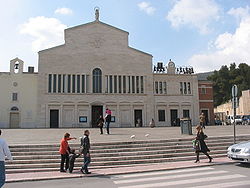